Yes, I am very tardy in writing blog entries.  I really enjoy the blog - and a million other things that pull me away from it.....

In February I travelled to Guelph to attend son's graduation.  He achieved his Master's of Science in Mathematics.  This is a major accomplishment for him and we are so very proud of him.

Lambing began in late April and went very smoothly this year.  Thirteen ewes birthed 24 lambs, including one stillborn triplet.  All 23 survived and thrived over the summer.  Son came for a visit at this time.  It was a good time as I had vacation from work and if I needed a hand he was more than willing to pitch in.  He got in a bit of fishing in nearby creeks.

Two lambs were orphaned at two weeks of age when their mother suddenly died while being shorn of her wool.  This is a very rare occurrence.  The orphans went down the road to the neighbours for a few weeks until they got them onto a bottle schedule that worked around my work schedule.  They did okay but orphans just don't seem to bounce back or catch up and so they were sold as soon as I found an interested party.

Maple syrup season and lambing tend to overlap as both are spring activities.  Maple syrup is Hubby's activity as I'm involved with the lambs.  I do the final step, hot packing the readied syrup into jars.  This year we used a hygrometer which has been super for assessing when the syrup is ready. For the second year in a row we had a bumper crop of sap.

Over the previous year we had extensive farm fence installed.  It. was. very. expensive.  Fencing is expensive.  Good thing it lasts 25 or so years.

With the perimeter of the pasture fenced I then set up electric fence netting to section off smaller areas inside the perimeter.  In this manner the sheep are moved every four days.  Although quick to take down and set up it's a lot when you work full time off the farm.  Moving the sheep every four days has had excellent results.  It is good for the pasture and the land; and, the sheep.

It was a very wet spring and difficult to get the vegetable gardens planted.  Many things did not get started well, so the output was less than other years.  I am trying to cut back though so it was alright.  For the first time we used wood chips for mulch and this was very successful. In the past we bought straw for mulch but it was hard to find straw due to last year's excessive rain.  A neighbour who has a tree cutting business is always looking for a place to dump the wood chips.  Later I took another load and used these for bedding in the barn after it's annual clean out.

In July I cut back to working 4 days a week.  This has been very beneficial.  I actually feel I've had a rest by the end of my 3 day weekend.  And sometimes I even get my house clean.  Sometimes.

In mid-July Hubby started a new job with the same organization, just a different department.  Life got kinda crazy after that as he got a few jobs all crammed into one and he was working weekends and evenings and not getting much rest.  And then he wasn't handy for a quick hand in the barn.  By late Fall some of this started to subside and life looks a bit more normal in the New Year.

Lots of things seemed to happen in September.  Daughter was here from Amsterdam, on her way to a conference in Boston, I think.  Son came for a visit too so we had a grand time, the four of us, over a long weekend.  We were all sworn to secrecy until all was confirmed to be well, but this is when daughter told us she and her darling husband were expecting.  This was VERY EXCITING NEWS.  Indeed!

Also in September, we acquired a riding lawn mower.  The bush hog on the farm tractor just doesn't do a fine job of mowing lawn.  The new equipment does a nice manicure.  We also had some excavation of ditches done over the summer.  The front yard drains way better now and has taken the pressure off of some basement seepage that has been ongoing since we moved here five years ago.  We had some culverts installed in some boggy spots on the property so as to assure we won't get Oz the tractor stuck there at soggy times.

I had been toying with an idea for awhile and finally just did it.  I always feel badly that a ram spends so much of his time alone.  We haven't had a ram in a few years.  Last year we borrowed one and planned to do so again, however the poor guy broke his leg and had to be euthanized.  The new ram was scheduled to arrive in October.  So, I bought an Angora goat to keep him company.  I picked up Nigel mid-September.  Born in April he was not very big and fit in the dog cage in the back of my car.


Angora goats provide us with Mohair which is lovely to spin.  Angora goats are clipped (or shorn) twice a year.  Nigel had been clipped the week before I picked him up.  He is castrated so there will be no baby Nigels, and hopefully the stench of billy goat will not be a problem.

My Mom's 80th birthday was at the end of October.  We travelled to Guelph to gather with the family to celebrate.  We had a lovely dinner out at a nearby fancy mill restaurant.  Happy 80th Birthday, Mom!!  Mom's birthday is Halloween and one of her favourites is candy kisses.  She always took ours.  I didn't mind because I never liked them.  I bought her a bag of her own for her 80th.

In the Fall I submitted some photos for the first time to the annual photo contest of the Ontario Sheep Farmers.  We are members of this organization that represents sheep farmers in various matters across the province.  We were thrilled to learn that one of the photos won the contest.  We won in the category of "Around The Sheep Farm" and we also won for "Best Overall".  The winning photo is featured on the front cover of the December issue of the Ontario Sheep News magazine.  In addition I had already selected that photo for our 2020 calendar. 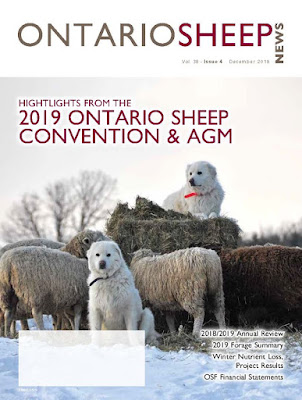 As we wrap up 2019 we are reminded of how fortunate we are to live here.  We love the property, the animals and the lifestyle.  We enjoy good quality food, some of it homegrown, while other foodstuffs are locally produced.  Also we welcome visitors and provide tours and information for those interested in learning about agriculture and the interesting geography of the area.

To you and yours, Merry Christmas and Happy New Year!